Here's a list of board or card games that are based, more or less, on computer programming, along with a description. The games range from obscure to humorous.

I'm still waiting for "Ruby: The Board Game". Hey, if Fortran can have its own game... (see below).

Discover the fundamentals of computer programming by playing a board game! c-jump helps children to learn basics of programming languages, such as C, C++ and Java.

The game teaches basic commands of a programming language, such as "if", "else", "switch", and introduces variable "x" concept.

Skiers and snowboarders line up at the start location and race along the ski trails. Spaces on the board show statements of programming language. First player to move all skiers past the finish line is the winner.

Players calculate number of steps in the move, including addition, subtraction, division, and multiplication of small numbers. The game helps to develop understanding of a complete computer program, formed by logical sequences of commands.

The game contains a deck of 100 cards. There are Problem, Solution, and Value cards. Oh, and a Joker card, of course. The intention of these cards is to help people to understand the methodology behind Extreme Programming and improve the way they practice XP.

Problems and Programmers is an educational software engineering card game. Featuring over 120 unique cards, it is intended to simulate the software development process from conception to completion. The game's players compete to finish their projects while avoiding the potential pitfalls of software engineering. These players will quickly learn that the strategies that will let them win the game are the same that will help them in the real world.

As well as building WFFs (Well Formed Formulas), players must also try to reach a goal by using rules of inference.

For good measure, the board has also been updated from two dimensions to three.

bOOleO is a card game which combines strategy card play with the concepts of Boolean logic. Players must race to resolve an initial binary number to a single specific bit. This is accomplished through the use of logical gates.

This is a perfect information abstract game with a light theme of computer programming. Each player builds a small program that then modifies itself and the other programs on the board, trying to isolate the instruction marker of the other players so that it's the only running program in the memory.

Management Material is a card game with a corporate theme where the players try to win by avoiding being promoted to management. This is done by playing Excuse cards to avoid the Project cards and passing the Project to the next player. Other players may also play Recognition cards on you, which make it more difficult to get out of the project with an Excuse. Ultimately, some player will end up completing the Project, and that player adds the card to their completed projects, pushing them closer to the 30 points necessary to be identified as Management Material and losing the game. The last player that avoids being promoted to management wins the game. Event cards provide an additional randomizing element.

The elements of how a computer program works are learned as players move through the program, entering values on three different "counters," and transferring results to their own "printers".

This is the computer crime card game inspired by the 1990 Secret Service raid on Steve Jackson Games. Play is similar to Illuminati except players play cards as part of the ever-expanding "Net" in the center of the table instead of having individual card stacks. Players use indials to break into systems and gain root access. Upgrade your hacking tools, deal with other hackers for access, phreak others onto your system, etc. is all part of the game. Avoid ICE and law enforcement raids to gain the greatest number of root access sites and win the game.

Players program a simple Turing Machine, also known as a State Machine. One cube, called the pointer is positioned opposite a line of 7 other cubes, called the tape. For each state that the pointer/tape is in, a player writes an instruction changing the state, and moving the pointer. Points are scored for the number of times the pointer moves, unless the pointer moves past the end of the tape (a bug) or gets trapped in an endless cycle of instructions (a loop).

You just finished your program, right on time. Now you only need to process it through the computer and print your report; it’s going to be a major breakthrough for mankind.
As you go by the hall, you see that strange fellow that works at the other end of the laboratory, and, of course, you never liked him. As you walk you realise he is going to the same computer room as you. He also realises this and, running, you both enter the computer room.
You argue, the lab rat responses, "I was here first!" Just as the dispute was going backwards in evolution, the technician says the stupidest thing: "Why don’t we share the computer?"
You agree, but you know that the computer only has 4 slots for 8 computing boards; you intend to be smarter than him and have your program processed as soon as possible. 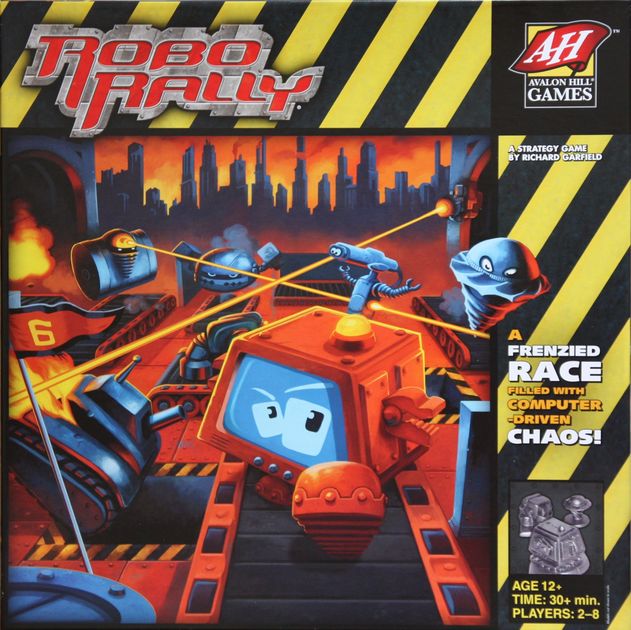 The robots of the Robo Rally automobile factory spend their weekdays toiling at the assembly line. They put in hard hours building high-speed supercars they never get to see in action. But on Saturday nights, the factory becomes a world of mad...

ansferring results to their own "printers".

This is the computer crime card game inspired by the 1990 Secret Service
raid on Steve Jackson Games. Play is similar to Illuminati except
players play cards as part of the ever-expanding "Net" in the center of
the table instead of having individual card stacks. Players use indials
to break into systems and gain root access. Upgrade your hacking tools,
deal with other hackers for access, phreak others onto your system, etc.
is all part of the game. Avoid ICE and law enforcement raids to gain the
greatest number of root access sites and win the game.

Just be prepared to be arrested by the Secret Service for possessing
this game.

A hacker is a highly skilled computer expert, including: Hacker may also refer to:

Yes, I've played RoboRally. It can be fun, yet aggravating.

There are a slew of games that fall into that genre, such as:

We had a non-geek friend who had so much trouble with right and left in that game that she tied a piece of foil to her robot's right hand as a reminder. I wish I could say it helped.

Here's a list of board or card games that are based, more or less,
on computer programming, along with a description. The games range
from obscure to humorous.

It's not from boardgamegeek.com nor is it a board game, but I found light-bot to be a great little bundle of fun:
http://armorgames.com/play/2205/light-bot

It's pretty amazing really. Both Hacker and the Cyberpunk manual are
Hollywood-grade content. Fun, maybe; amusing, maybe; but not
particularly
useful, reality-based or seditious.

It brings back some fun memories of the late 80s and the hysteria which built up in the aftermath of the Morris Worm - because hackers were a heartbeat from launching thermonuclear armageddon, or something like that lol

It makes you wonder about competence in certain quarters...

There was a noticeable overlap between the hacker and gaming scenes at the time so I guess it wasn't entirely dumb-headed of law enforcement to go snooping, but being clueless noobs they made a real hash of it...

The full version of the story can be found at http://www.sjgames.com/SS/

The full version of the story can be found at http://www.sjgames.com/SS/

The fact that this 'incident' provided some of the impetus for
the founding of the EFF can only be viewed as proof that the
universe has a wicked sense of humor.

The eschaton is immanent, and it will be televised ;p

I'll see your Vinge and raise you a Tipler...

The eschaton is immanent

What a relief! I thought it was imminent...

I'll see your Vinge and raise you a Tipler...

You know, I'd like to pursue this but I keep stubbing my TOE
on precursor states...